2nd Screen expected to dominate the news and exhibits at CES

Already being dubbed the "Tablet Christmas" in London as retailers are seeing tablets fly off the shelves and into shoppers baskets at the rate of 1 per second, there is a large surge expected in tablets this holiday shopping season--so large that IDC has increased their 2012 forecast for tablet sales by 5 million units to 121 million units worldwide.  While the Huffington Post believes the driving force will be the wide spread availability and lower price point of 7-inch Android tablets, one thing is for sure, it is going to be a "2nd Screen CES" as a result, with major TV service providers working hard to attract revenue as more than 70% of table owners use their devices while watching TV. 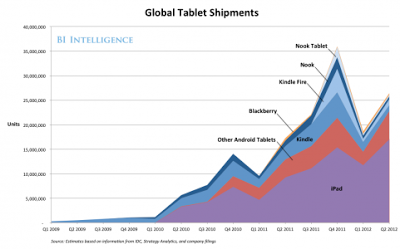 With such a massive increase in household penetration (35m tablets expected to be sold in the holidays for the US alone), major hardware and software companies are positioning to launch their individual 2nd screen applications and strategies at International CES in early January.  Not surprisingly, the official  conference program this year at the industry's largest worldwide convention is being kicked off by the 2nd Screen Summit (www.2ndscreensummit.com).

Major product launches at the show have already been previewed by a number of network broadcasters, large CE manufacturers and Pay TV Operators--so much so that even CNET predicts that all of the press activity that matters will be centered around this rapidly growing market segment.  You should expect that a host of new content and living room synchronized apps will be unveiled which are set to transform the consumer's 2nd screen companion viewing experience, as well as empower a new generation of remote control tablets, content discovery guides and social connectivity from the living to the social networking world.

The research report entitled "The 2nd Screen: Transforming video consumption by enabling companion applications and content everywhere" states that the accelerating 2nd Screen companion app market is already estimated to be at $490 million in 2012, and will rocket to as large as $5.9 billion by 2017.  Created by Chuck Parker and Renaud Fuchs and presented by the 2nd Screen Society, the report presentation at the summit will highlight "Why 2nd Screen Matters", presenting both the market size and segmentation of the hundreds of consumer facing apps in the market place, while the report itself will cover a detailed analysis of the apps themselves, the build-up of the market sizing, a deep-dive on the technology driving this space, and more than 50 case studies on the leading apps in the market.  Additionally, the report will cover how consumers are using their 2nd screens as 1st screens both in and out of the living room, as TV Everywhere strategies come into full effect in the consumer market place.  The full 250-page report will be available on January 8th @ CES.