As an experiment, I thought I would test drive a number of popular apps over the weekend while watching a popular football game.  The Notre Dame / Miami match-up was perfect for the trial.

Since the game was being shown on NBCU, I gave their NBC Sports LIVE EXTRA app a try.  While it is a pretty decent app, even allowing you to stream the game on a 30-second delay, there was no real second screen experience--more of a first screen on your tablet if you are no where near a TV. 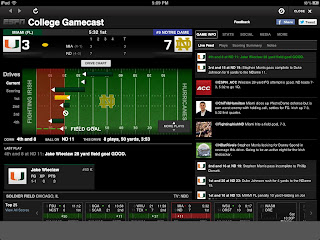 So I gave their rival network app a try: ESPN ScoreCenter.  It took me a while to find the right place in the app to get a second screen experience (under "college gamecast").  The experience was actually VERY good.  I was impressed with the near-real-time updates of the play-by-play activities intermingled with some curated tweets and other information (see image).  It got me thinking and I went out and searched for "college football" apps.  Surprisingly, there is only one that comes up in the search that is relevant: also an ESPN app called ESPN College Football.  Ironically, the interface eventually gets you to the same "college gamecast" functionality.

Satisfied with the "dedicated app" experience (despite being from ESPN and not NBC or NotreDame), I thought I would give the 3rd party apps a try. 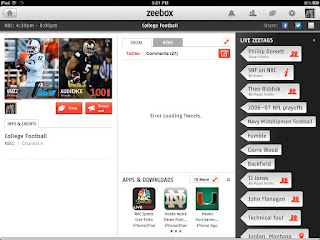 With all the recent U.S. launch press zeebox received, I thought I would try them first.  The zeetags were interesting, though the Twitter feed had some trouble, and there was no play-by-play or game graphics to enhance my game experience.  It did point me to the right places to download team specific apps, etc, which was helpful.  Assuming the Twitter feed can be fixed, it is a decent experience.

I tried a few of the apps more focused on connecting you to the show itself (BuddyTV, Fanhattan, NextGuide), and while I was not expecting anything special beyond getting to the game itself, I tried each app.  BuddyTV and NextGuide were the best at pointing me to the right channel, with BuddyTV able to actually set my AT&T receiver to the actual game itself--but then then second screen experience ended.

I tried my favorite TV synchronization app TVplus, but they had clearly not set anything up for this football game.  Out of curiosity, I tried the currently popular gamification app Viggle, but again no experience was setup for the football game. 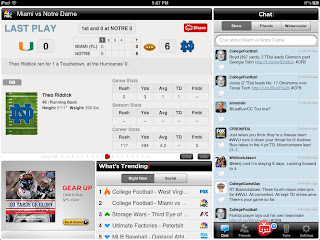 Then I read back through some of my notes about other reviews and gave ConnecTV a try.  It delivered what I thought was the best 3rd party second screen experience.  While it did not have graphics of the plays, it interlaced a "last play update" with other contextual information about every 30-45 seconds.

As the majority of 3rd party apps fell well short of expectations, perhaps this is an example where the dedicated app is still required for a great second screen experience.

The good news is that if you like NFL Football, there are plenty of good second screen app experiences to choose from.