And then I re-read the most recent Gartner report called the “Hype Cycle for Broadcast and Entertainment - 2012.”
The Hype Cycle has been a great tool for discussing the adoption of everything in the technology world from concepts like the PC or smart phone to more complex challenges like “big data”.  So, as we are about to gather at IBC this Saturday to passionately discuss our views about where the industry is headed, what the real challenges are, and where the opportunities lie for content creators and distributors, app developers and service providers, I thought I would lay out my own views of what is a “nascent” technology triggered feature for the consumer, which of those have reached the peak of inflated expectations, which are already slugging it out in the trough of disillusionment and which have graduated to the slope of enlightenment or have made their way already to the peak of productivity.

To give few examples from the 2012 Gartner chart, 3D TV Services are still at the technology trigger stage, Social Analytics are at the peak of inflated expectations, 3D Flat Panels and Displays are in the trough of disillusionment, while IPTV is making progress up the slope of enlightenment and Mobile Music Streaming is already on the plateau of productivity.

I hope you enjoy the graph and my brief explanation of my views below.  I am looking forward to having a spirited conversation about my point of view with many of you in Amsterdam @ IBC 2012 at the Okura Hotel on Saturday, the 8th of September, at 4.30pm (come by for a cocktail at least).  Registration is linked here.
@ChuckParkerTech 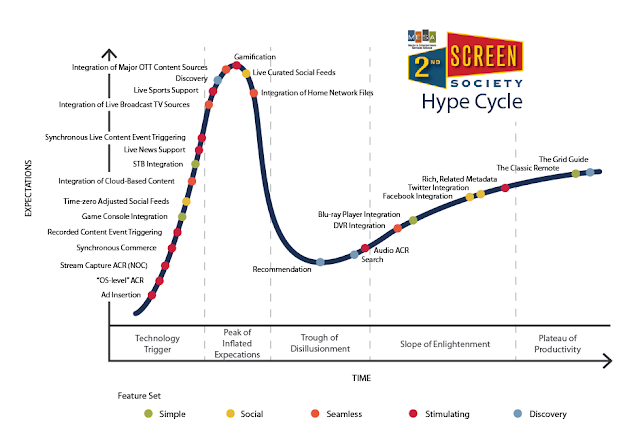 Technology trigger.  For the most part, these features are on their way to the consumer, but are still in the very early stages of development in our industry:
o   Simple.  STB integration.  Operators are only just now opening up and publishing their APIs to allow third parties to integrate their app functionality.  Some of the operators are still struggling to control their own STBs.  BuddyTV is the leading 3rd party app in this space, while the major players like DirecTV, Comcast, and AT&T lead the way for operators in the US—outside North America it becomes very complex quickly and there is a long road ahead.
o   Simple.  CE device integration.  Manufacturers are making progress with their own apps, but are also less sure how to proceed with 3rd party developers.  LG is leading the way in this space today as they publish APIs to integrate into their device world.
o   Simple.  Game Console integration.  While Xbox has taken a big leap out front with SmartGlass by committing to an SDK for their platform, the rest of the console market is still at the drawing board.
o   Social.  Time-zero adjusted social feeds (for pre-recorded events).  App developers and content creators are only now recognizing that time-shifted content (eg the Olympics) must have the option for time shifted social commentary to avoid the spoilers.  TVplus does this very well.
o   Stimulating. “OS-level” ACR.  The concept of the device or player being aware of the video time code and being able to respond to event triggers has been around for awhile and Flingo is building a business based on the concept, but for the most part, this is truly nascent technology.  Expect announcements in this area at IBC and CES from players like Apple, Netflix and Roku.
o   Stimulating.  Stream capture ACR (NOC).  While the concept of tracking watermarks and fingerprints in video has been around for years (see Civolution), using this to manage event triggers on the 2nd screen is only just getting started.  The most likely to succeed here are probably Civolution with their 17k monitored channels.
o   Stimulating.  Synchronous commerce.  The first few attempts have been either interesting or painful—a lot of work required in this field to balance relativity and ease of use for the consumer.  There are some apps by Magic Ruby (Fox’s SOA Gear) and WatchWith that are worth watching in this space.
o   Stimulating.  Ad insertion.  We are only just now seeing 2nd screen ads being inserted by an awareness of the content on the 1st screen—but this is a rich monetization opportunity for the industry.  I would expect Zeebox to take an early lead in this space and Young and Rubican will work hard to make this space valuable for their clients.
o   Stimulating.  Live news support.  There are a few interesting apps which are leveraging the audio stream to summarize news stories on the fly to give additional information, but this powerful concept is still nascent.
o   Stimulating.  Synchronous live content event triggering.  Apps like Zeebox and TVplus have delivered some very interesting use cases from this capability, but scaling this capability beyond major events is the real challenge.  Check out Mobovivo’s Toronto Blue Jays app designed for live syncing at the stadium between broadcast, the jumbotron and the 2nd screen for a glimpse of the future.
o   Stimulating.  Recorded content event triggering.  This becomes more of a metadata availability and association challenge to deliver an experience beyond niche content, but TVplus, Zeebox and WatchWith continue to lead the way in this field.  Expect companies like Digitalsmiths who provide scene level metadata to help close the scalability gap her for the industry.
o   Seamless.  Integration of cloud-based content.  As consumers begin to use Ultraviolet and iTunes cloud-based content ownership, there need to be services which can integrate these sources into search and discovery experiences (similar to what is done today for subscription services).  Today, there are not any 3rd party services delivering on this promise that reach beyond native first party experiences (ie iTunes, Vudu, Amazon).

Peak of inflated expectations.
o   Social.  Live Curated social feeds.  The technology is working, but when and how to implement is creating a consumer backlash (spoilers) for except truly live events (which did not include the Olympics).
o   Stimulating.  Live sports support.  Getting stats for your favorite professional sport is a reality (AtBat, Courtside, NFL ’12), but taking it beyond an interesting use case into monetization is going to drag this feature down to the trough of disillusionment before it can ascend again for business leaders.  Cost effective scale and ubiquity will be the challenges here.
o   Stimulating.  Gamification.  From simple trivia games to complex fight scoring and zombie kill counting, exciting games are engaging consumers in large numbers.  Viggle and TV Dinner are touting strong numbers of engaged consumers in this space and anyone who’s seen Mobovivo’s AXS TV Fights app or Red Bee’s AMC Walking Dead app can attest to the interactive engagement those experiences create.
o   Discovery.  Discovery (the ability to be presented with relevant content in a lean-back mode).  Quickly headed for the trough, this is a much sought after (holy grail) feature that no one is implementing well (yet).  Most of what consumers are getting today is a collaborative filtering-based recommendation (think Amazon-style “people who viewed this also liked...”), but Digitalsmiths’ Seamless Discovery seems to be gaining traction with both pay TV operators and connected CE manufacturers with a next generation algorithm.  Expect this to be THE use case for operators to chase in late 2012 and 2013 with announcements at IBC and CES.
o   Seamless.  Integration of major OTT content sources (Hulu, Netflix, Youtube, Amazon).  There are some apps showing initial progress (Matcha, BuddyTV, Fanhattan), but this will suffer from UI challenges before it gets better.
o   Seamless.  Integration of live broadcast TV sources (cable, telco).  Operator apps are doing this well, but perhaps the best implementation to date has been BuddyTV (integrating your MVPD and OTT provided content).
o   Seamless.  Integration of home network files (professional).  Clearly apps like Boxee have jumped out in front, but for this to be valuable to the consumer, the apps need to effectively integrate at least the presence of all major content in the home (iTunes, Vudu, Amazon).

Trough of disillusionment.
o   Discovery.  Search.  While this is technically feasible, poor metadata and a lack of integrated sources of content have made this a poor consumer experience.  Fanhattan is probably the best at this so far.
o   Discovery.  Recommendation.  While the Amazon collaborative-filtering approach has been around and social networks are just now being integrated, this is for the most part a poor experience for consumers, usually relying on a list-based approach (top 10 this week, your friends are watching, etc).
o   Stimulating.  Audio ACR.  Having made quick progress up the to the Peak of inflated expectations, the wider-industry is now utilizing this for “check-ins” mostly as the quality for event triggering has been unreliable.  Climbing up to the slope of enlightenment is going to require ubiquitous scene level metadata and use cases that integrate better polling of the audio stream to determine relative time code accuracy.  Despite the “acoustic” challenges, there are some great apps being delivered by companies like Red Bee Media (AMC’s Walking Dead), Yahoo’s IntoNow, ConnecTV and TVplus.   Expect companies like Civolution to begin integrating this with “OS-level” and stream capture ACR to improve the overall user experience.

Slope of enlightenment.
o   Simple.  Blu-ray player integration.  BD-Live based 2nd screen applications for your Blu-ray content already integrate well into the video stream, allowing application developers to trigger events based on metadata and with Wi-Fi capabilities, give a consistent and accurate experience to the consumer.  There are a number of decent apps in this space based on movies and TV shows from the likes of Disney and Magic Ruby.
o   Seamless.  DVR integration.  Nearly all of the operators have created apps that integrate both the recording and playback of content from the DVR.  They continue to make progress in making these assets available in content search and discovery and to opening the integration to 3rd party apps.
o   Stimulating.  Rich, related metadata.  There are many apps which perform this function at some level (some are apps dedicated this use case like IMDB).  However, Fanhattan and Zeebox continue to lead the way in this field, leveraging metadata service providers like Digitalsmiths and Tribune Media Services.
o   Social.  Facebook integration.  Nearly every 2nd screen app is able to effectively integrate Facebook into the experience, leveraging the app as a single-sign-on gateway in addition to allowing “check-ins”, “likes”, and comments.
o   Social.  Twitter integration.  Perhaps the most used 3rd party widget in the 2nd screen world, the automated searching of appropriate keywords and hashtags has made this a pretty robust experience for live events (pre-recorded events are still spoiler-challenged).  Perhaps the best overall socially integrated app these days is Yap.TV.

Plateau of productivity.
o   Simple.  The classic remote.  The last improvements came from companies like Harmony, allowing more efficient programming and usage of the 1960’s-based device.
o   Discovery.  The grid guide.  While some operators have customized the grid guide with favorites and there is discussion of a “custom channel” approach, any real improvement in this content search and discovery method is most likely to come from new UI approaches.