We started with the current TV Guide Top 20 (as of August, 2012).  I realize that the Top 20 would have been different in May and will be different in October once the season is underway, but this is a unique time of the year where even the most protected of shows has finally exited their Spring window and have been pushed out on DVD or at least a digital purchase service (if not a streaming one--rental by the episode is no longer supported by any site).

What were the results?  Surprising to say the least.  First, let me give you an idea of the list (since it is relatively short): 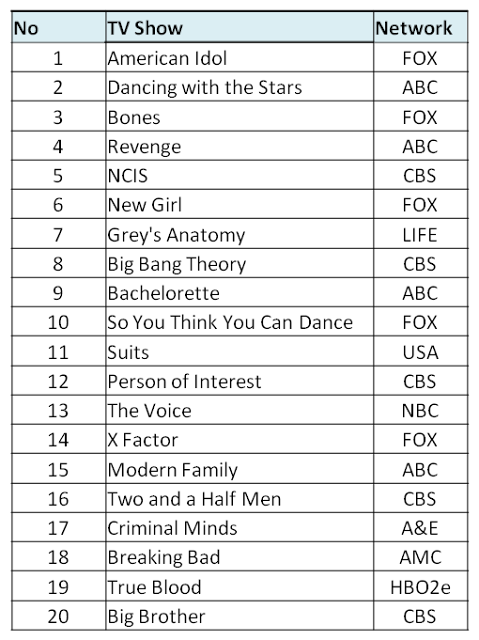 Now with this list, you would have thought there would be a high probability to have nearly all but the HBO and AMC series available already.  The results?


So, unlike the Top 100 movie title availability, digital can be a better option (across many services), but is no where near the option most of us believe it is (by having a single subscription service).  The good news on the movie front is that UltraViolet has continued to make progress since May and the title availability in the Top 100 is now about 50%, with a marked improvement of titles in the "SD" digital format (probably due to Wal-Mart's exchange program).

So, if we want to capture the consumer, the lesson remains for the movie side of the business--get the majority of titles available in the system.  But for the TV side of the digital video world, we need to either simplify the consumer offering or make it easier for the consumer to navigate across the various services to find the source of the content they desire.

See you in London on Wednesday.

@ChuckParkerTech
Posted by Unknown at 5:30 AM