Examining Second Screen through the eyes of "TV Experts"

Last week, Noel Murray wrote a well-thought out piece on his recent second screen experiences called "The 'Second Screen': Is This App Really Necessary?"  He did a good job at describing what many consumers experience when they encounter new technologies or new experiences driven by technology.  Noel did a decent job of trying different apps during different major events (Super Bowl, Oscars, Grammys) and during every day television, but I think his logic erred slightly when he made his conclusion.  Let's briefly examine.

First, he describes himself as someone who does not understand the seemingly popular desire to participate in social media (whether Twitter or badge driven experiences like GetGlue).  But as Noel himself states, "But the second-screen phenomenon has become increasingly difficult to ignore."  That fact that this is a phenomena means by definition that it is a change in consumer behavior--perhaps fueled by social media or perhaps by the uber-availability of smartphones and tablets, but it is a set of activities that many people are participating in despite the fact that most experiences are poorly designed.  Now that is powerful--imagine what might happen if the consumer was consistently presented with a strong UI/UX--it might be like the change in smartphone usage when Apple entered the market place and created the first experience for the "everyman" vs. the techie. 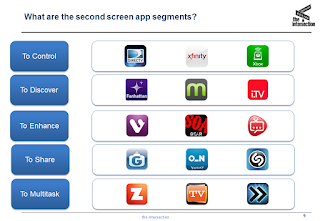 Second, Noel does a good job at working through what feature sets he would like to see as a consumer himself (though he is self-admittedly a niche demographic).  He starts to describe "Stimulating" features to Enhance his viewing experience.  When we look at most consumers, we find that they tend to pick up a device in the living room for 1 of 4 major reasons: 1) To Control the first screen (think of your classic remote), 2) to Discover something to watch (either an archaic EPG or a sophisticated Discovery app), 3) to Enhance their viewing experience (the companion experiences Noel desires), and 4) to Share their experience (yes, the Social TV aspect of second screen).  While I agree that not all of the apps Noel tried are great at Stimulating features (to Enhance the viewing experience), the apps he did try do have some strengths.

Finally, Noel comes to a conclusion that the apps he tried didn't seem to solve the use cases he was after and seemed to be trying to solve problems he didn't have, and that the networks are just trying to slap a logo on top of Twitter and Wikipedia functionality to call it their own--which presumably leads us back to his title that the app isn't really necessary.  And this is where I think the error in logic exists.  What we know is that a very large percentage of consumers who own smartphones or tablets are engaging in second screen behavior.  We know that the majority of "developed" experiences need improvements, but that a majority of consumers tend to find an app better than a self-developed collage of Wikipedia and Twitter experiences (otherwise apps on Smartphone would never have taken off and we'd still be using a web browser on our small devices instead).  And as to the intention of the publishers of the apps (very often the TV networks or 3rd party start-ups), we can rest easy in knowing that regardless of the business model intent, no app can succeed that does not first create utility or entertainment enough for the consumer that they come back to it on a continuous basis.  So, rest easy Noel.  This nascent market will find its way forward and app user interfaces and user experiences will improve, and you will eventually be able to point to your own use cases desires and say "There is a second screen app for that."

And for the industry, this is a great reminder that the user experience is paramount to any particular apps success.

If you are interested in more discussion about this topic, join us at NAB on April 7th for 2nd Screen Sunday at the Encore Hotel in Las Vegas 1-6pm (cocktails follow).  If you would prefer to read about it, I would encourage you to check out our 252-page research report on the subject at www.2ndScreenSociety.com/research/

Last Tuesday, a little over 250 industry professionals gathered for a 2nd Screen Summit in Beverly Hills.  No one in the audience had any idea that they were about to see the most thought provoking keynote presentation on the future of TV and Second Screen.

Robert Tercek has been "Inventing the Future" of media and entertainment throughout his 25-year career.  He is passionate about inspiring audiences to seize their own destiny by thinking creatively and taking decisive action. His business strategies are informed by his personal experience as a pioneering executive for MTV, Sony and OWN, and as an entrepreneur in disruptive startup ventures.

We've spent time in blogs (including this one) and on conference panels debating the subject: as the industry evolves, will there be one app "to rule them all" or will the market evolve into a collection of specialty apps for major events or niche interests?