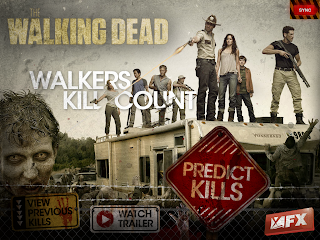 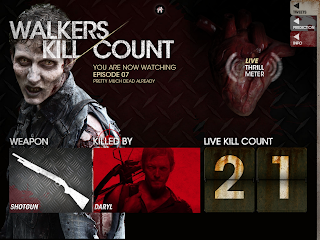 The UI is simple and clean. You have the opportunity to check out trailers, previous kills, etc, but once you click into the main portion of the app, it starts to sync via audio-based ACR (automatic content recognition) to determine what episode you are watching. It offers you choices of human killers and their weapons for the episode--and of course the kill count prediction. That's it! You then just watch the episode and as the kills unfold, the app (using audio ACR) lets you know who killed that zombie and with what weapon, and the kill count tally rises by one. A perfect combination of a passive experience (you can glance down or not as desired) that is incredibly Stimulating for the demographic of the fans of this show. 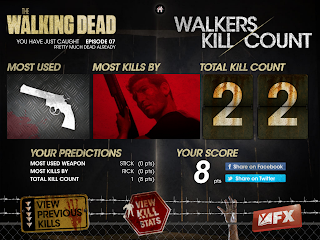 At the end of the show, your score is tallied (based on your predictions) and you are then offered the opportunity to share your prowess with your friends via Facebook and Twitter.

Honestly, the only disappointing part of this app is that it is only available for use in the UK. I've been saying that consumers need a reason to pick up the tablet or smart phone if you want them to engage with your show--FX and Red Bee Media have certainly found a great reason for the consumer to do so.