The Masters 2013 - another strong showing for sports in second screen 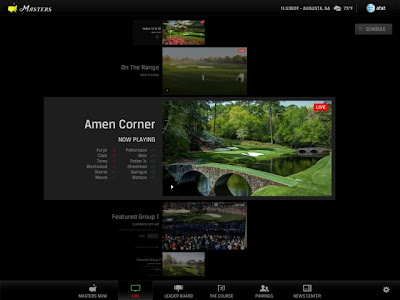 Last year, the Masters 2012 had one of the strongest showings as a second screen app. Building on a converged experience use case (both as a companion experience while in the living room and presenting a viewing experience for consumers on the go AND for video footage not shown on television), the 2013 version has continued to emphasize its strongest features (the ability to follow your favorite players, get alerts when they are on live TV, the ability to see video recaps of their efforts, etc) and has developed the converged viewing experience opportunity even further (integrating "free" broadcasts and Pay TV authentication when appropriate). 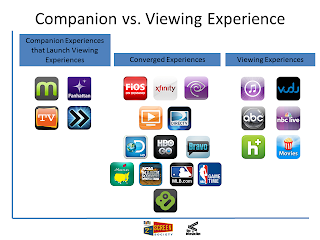 The UI is clean and easy to navigate and the alert setup is well done (letting you know when you turn on live streaming to see your favorite players live).  While they still have not embraced the Social TV side of second screen, they are knocking the ball out of the park on delivering an Enhanced experience (Stimulating) and have used a converged experience to deliver the Control and Discovery feature sets.  Expect this trend to continue in dedicated sport event apps (Enhanced experienced combined with a Converged companion and viewing experience) similar to the other apps shown in this graphic (ie March Madness). 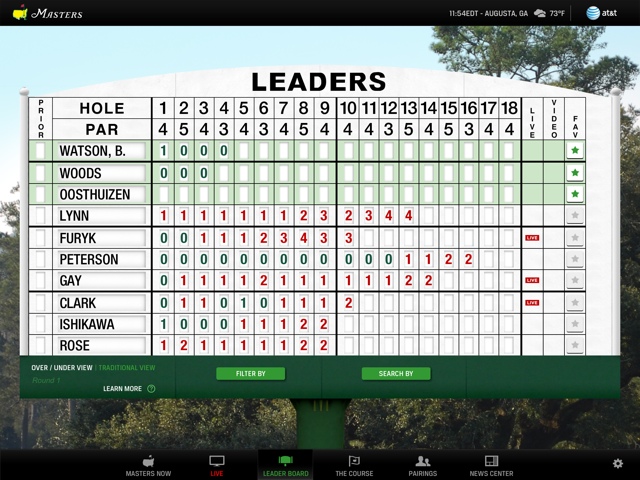 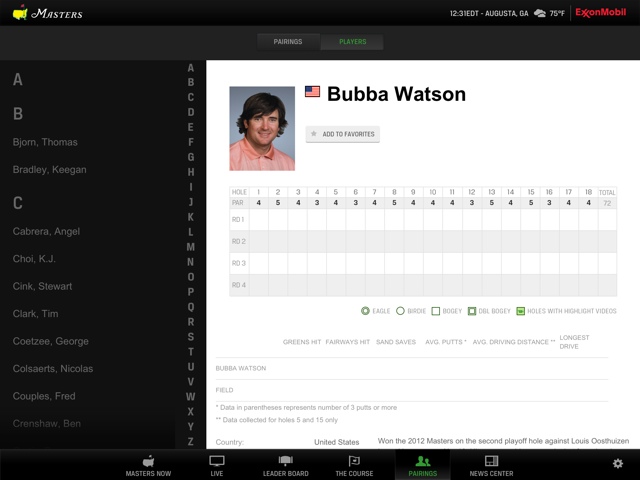 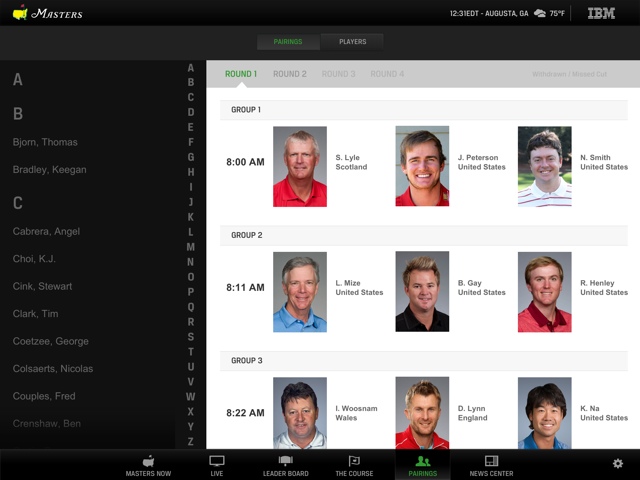 Email ThisBlogThis!Share to TwitterShare to FacebookShare to Pinterest
Labels: Masters

With NAB Show just about to wrap up, we thought this would be a great time to recap Sunday's second screen event in Las Vegas.

Registration kicked off a little early on Sunday as were expecting "a few walk-ups"--we ended up with an incredibly long line that would not abate and actually had to start the program late to get the most of people into the room for Hardie Tankersly's keynote, which kicked off the event to standing room only of 350-400 people. 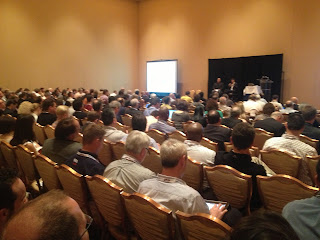 Hardie delivered a great keynote in a fireside chat format (lead by Seth Shapiro), helping the audience to understand why getting the metadata that powers the rich second screen applications syndicated to key partners is so important.  Those key partners joined Hardie on stage after the keynote to talk through the challenges and take audience Q&A.

We tested the waters with a "2nd Screen 101" session where we expected 15-30 attendees to join in a parallel program track--and were surprised when 100-115 joined the 45-minute session.  The industry is clearly now mature enough that we need to facilitate great thought leadership to at least two segments of participants: 1) experts who live and breathe this stuff every day, and 2) new entrants who are just starting to figure out what all the fuss is about.  Expect to see more of this type of content from us at our 2nd Screen Summit in NYC in late June.

iPowow, one of our newest members, delivered an incredibly engaging live second screen experiment during a technology spotlight, engaging the audience in 3 live voting scenarios and show the results live on stage and then showing the parallel scenario that was recently aired on a live broadcast with the same live voting technology.

Kit Digital launched their "2Si" social discovery platform at the event, with industry thought leader Alan Wolk on stage guiding the audience through the features and consumer use cases it was designed for.

We had an incredibly engaging session on the direction of the second screen app market moderated by Marty Shindler, with industry veterans such as Alex Terpstra from Civolution and Tom Engdahl from Magic Ruby trading views with Tracey Garvin from Sony Pictures Home Entertainment.

Joe Inzerillo from the MLB dazzled the audience for 30 minutes, taking all of us through an incredibly detailed case study of their MLB At Bat product and how complex it is to have the level of success they have captured as the industry's #1 monetized app in the iTunes Appstore.

That was followed by Andy Batkin moderating a very engaging sports panel with Tyler Slocum from the NFL and Joe Inzerillo from the MLB discussing their brand engagement needs with industry startups TOK.tv, Kwarter and iPowow.

Jason Kint from CBS Interactive Sports had the closing keynote, taking the audience through a Super Bowl 47 case study and reminding everyone just how far reaching second screen can be for major events and the brands that sponsor them.

The conversation over cocktails buzzed along for quite awhile before a smaller group broke off  to engage further in second screen dinner that was sponsored by Kit Digital and Civolution.

Finally, and perhaps most importantly, about 30 of us gathered in a conference room on Monday to conduct a 2nd Screen Society Advisory Board meeting, discussing and progressing key industry initiatives around the DIAL protocol for device access and ad agency measurements.

Add all of the focused action to the incredible buzz of the NAB Show floor (which seemed to scream 2nd Screen and 4k) and it was an 2nd Screen packed week in Las Vegas.

You can check out the Twitter engagement during the show (#S3NAB) and, for conference attendees, we will be posting the audio and presentations under a password protected link shortly (with an email notification).

Look out for our webinar series on "Successful 2nd Screen Strategies" and join us in NYC during CE week June 24-28 to continue the discussion at our 2nd Screen Summit NYC, jointly presented with Broadcasting and Cable.

First Quarter, 2013: Are we on track? An update to the definitive research "The 2nd Screen: Transforming video consumption"

The first 3 months of 2013 has been explosive for 2nd Screen.  Apps have improved, new apps have continued to launch, clear evidence of growth in the revenue associated with the market can be seen, and the convergence of 2nd Screen companion experiences and 2nd Screen viewing experiences has continued.

In this brief summary, I am going to make references to our published research (“2nd Screen: Transforming Video Consumption”, a 252-page report published during our 2nd Screen Summit @ CES on January 7th), as well as to blogs and conferences we have hosted and attended during the last 3 months.  However, the information should be relatively coherent if you have been paying attention to the space even a little bit.  If you are attending today’s 2nd Screen Sunday @ NAB, you will have the opportunity to buy discounted copies of the Executive Summary, Market Starter Pack, or the Full Report as required.

So a relatively short but very action-packed summary for nearly 100 days of market activity.


We are looking forward to continuing the conversation today at 2nd Screen Sunday @ NAB, through a few webinars over the coming weeks, at our 2nd Screen Summits in NYC on June and IBC in September, and, of course, through our blog and Twitter activity (@ChuckParkerTech, @S32Day).
Look out for the next major update on this comprehensive report on June 27th in NYC.
Posted by Unknown at 9:11 AM No comments:

Second Screen by the Numbers - infographic

How did the first quarter stack up vs. our projected growth of the industry?

Come join us in Las Vegas for 2nd Screen Sunday @ NAB this weekend to discuss from 1-6pm (cocktails follow).

We have a content-packed program being kicked off by Hardie Tankersly from Fox and being closed by Jason Kint from CBS Interactive Sports with a lot of great panels and presentations in between.

(if you have trouble with registration, please follow the instructions here) 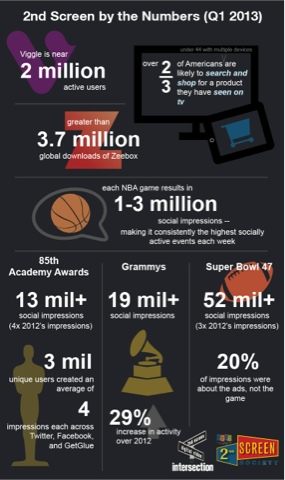 If you haven't been paying attention to March Madness, then you may still appreciate this for the second screen value alone.  Last year, this app demonstrated one of the best UIs and second screen feature sets in the industry (see last year's review here).  Developed by Turner Sports, the app continues to lead the way in terms of a Stimulating or Enhanced experience and is leading the market in Converged Experiences (where the app behaves both as a Companion experience and a Viewing experience).