The last time we published an app summary was just before the CES show this year in early January  and then again leading up to our 2nd Screen Summit in LA in mid-Febraury.  While the nascent 2nd screen app market segment has been exploding with new apps for shows, network channels, movies, major events, and sports all over the place, 3rd party apps have been quietly improving themselves and trying to find their way into more consumer living rooms.  As we prepare for another Second Screen Summit on June 27th in NYC, we should pause and review the progress those 3rd party apps have been making.

There has also been some retraction.  In our January and February summaries, we mentioned an app called Umami which we reviewed and mentioned several times in this blog. When you visit that app on your iPad today, you get a message indicating they have closed their beta running of the app--but it has been like this for several months now, begging the question if it will ever re-open. 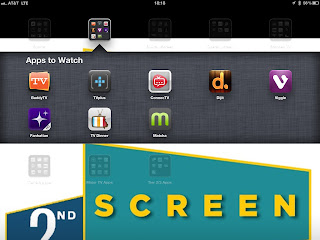 So what is the trend with 3rd party apps (those apps that try to cover a range of TV shows, movies, networks, sporting events, etc)? All of them are improving their Social capabilities (better integration with Facebook where the app can understand your friends and the TV shows/movies you have liked, curated and time-anchored Twitter feeds to help with spoilers). Many of them have made efforts to improve their integration with the living room device ecosystem (Simple), with BuddyTV continuing to lead the pack here. All of the apps have improved their user interfaces (UI's) and continue to improve their Stimulating feature sets (better information about the shows, some real-time and time-anchored content synchronization, and even show-based trivia and games). Some of them have expanded their efforts in the Seamless integration of content sources, adding Amazon, Hulu and even Xfinity to the popular sources of Netflix and iTunes. And all of them continue to try to implement some better level of search, recommendation and Discovery--perhaps the killer app of the 3rd party space (when combined with Seamless and Simple)--with Matcha, Fanhattan and BuddyTV leading the pack in this regard.


A few noteable newcomers (at least this blog last did a major summary) are:
1. Matcha. Launched their iPad launch in mid-March (review here) and has continued to improve its primary reason to exist--search and recommendation (aiming for Discovery). It has expanded its Seamless integration of content sources and has tried to implement better recommendation algorithms. It still lacks integration with the 1st screen (when you hit play, it plays on your iPad), you can rely on Airplay if you have AppleTV to solve that last 10 ft. problem.

2. TV Dinner. Launched in mid-January (review here), mostly focused around a few network shows on the East Coast timezone. They have expanded their shows and timezone efforts since then, but continue to have a primary focus around engaging consumers in social aspects and gaming/trivia during the show airing.

Some of our January front runners continue to improve their user experience (UX). Most notably:

4. Fanhattan in HD.  Has taken their focus on Stimulating features to the next level, updated their app to an "HD" quality for the iPad3 retina display.  They have also improved their search, recommendation, and Discovery features, adding in some pre-populated genre and power searches for faster, easier browsing and recommendations.

5. TVplus. Launched a new UI, allowing the consumer to more easily focus on what Stimulating information is being delivered with thru their curated (and time-anchored) Twitter feed or their information snippets on facts, trivia, shopping and advertising opportunities.

6. ConnecTV.  Has continued to add supported shows and improved the UX by allowing the consumer to "tune" to a show vs. having to use audio to sync to the show.  They continue to deliver real value for news and sports programs, though the synchronized information delivered for TV shows still feels a bit canned.

7. Viggle.  Has continued to add shows, delivering trivia and game experiences for consumers who then get "paid" in free gift certificates and also try to win larger prizes.

Finally, there are three strong players who have yet to really enter the US market, but will do so soon and will be forces to reckon with in the battle for consumer loyalty.

8. zeebox. Rumored to be making a launch in the US soon, launched in the UK in late 2011 (review here).  They have a great app that focuses on real-time content synchronization with "zeetags" enabling consumers to quickly jump to more detailed information about subjects or advertising and they offer some level of control (Simple) of living room devices.

9. M-GO. Rumored to be launching in the fall (review here), will most likely look like a combination of BuddyTV and Fanhattan that also provides and additional source of content which is their own catalog with studios. Look for them to be integrated in Samsung and Vizio devices this fall.

10. Dijit. Rumored to be relaunching app this month (previous review here), which was previously focused on "Control" (Simple) with integration with the Griffin IR beacon. I saw an early demo of the app and think you will find the new UI and feature set refreshing and helpful to TV watchers everywhere.


So, while there are still more than 100 apps out in the wild for consumers to get their second screen companion experiences, I think these are the 10 to watch for the rest of 2012. There will continue to be great reasons to use an app built for a specific major event or a specific film or TV show (as those content creators continue maintaining exclusive content access thru their own apps) and there will be better device control from operators and CE manufacturers as they continue to hold some features back for their own apps, but I predict the majority of the innovation that will drive the growth of this industry will still come from the 3rd party apps whose only business model is finding a way to engage the consumer in repeat use in the hopes of monetizing that experience in the very near future.