How was your Second Screen Super Bowl 47?

On Thursday, we suggested a few apps you might want to try out during the Super Bowl to see what kind of enhanced and stimulating experiences the market has dream-up for such an event.  How did they stack up? 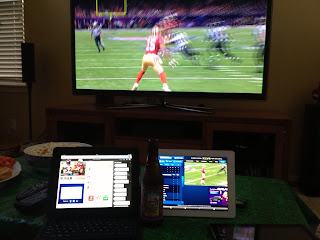 I did my experiment in a room with about 15 people, using 2 iPads, a Samsung Tab2, and an iPhone.  At times, friends/neighbors handed me their device to help them find one of the apps I was testing (passing around).  For the most part, people were surprised that they enjoyed the experience, usually starting with a "this is a distraction" followed by a "how do I get to that feature again?". 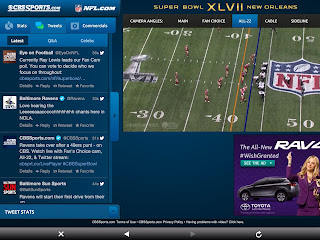 I had high hopes for the CBS Sports iPad app.  I was a little surprised to see their experience push you to an HTML website (rather than perform the experience in side the).  I was disappointed that they had trouble populating the stats and then during the blackout, the experience seemed to vanish (all of us got kicked out and could not find thru their app again).  I was also surprised that the HTML5 app had no social sharing features.  You were able to watch others tweet, but there was no easy way to make comments of your own.  The commercials section in the app (finally populated in the middle of the 2nd quarter) was probably the most used feature in our room.  The camera angles were interesting, but as the video was delayed 20-30 seconds, it just didn't work for the live game. 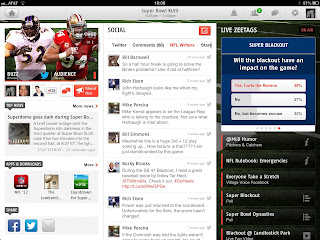 The room gravitated to the zeebox app the most (surprising even me).  The zeetags gained lots of interest, especially since it was so easy to see the previous commercials seconds after it aired, the big plays from other games they discussed, and key stats from players, the announcers, etc.  I enjoyed chatting to a few people via the app as well (Alan Wolk, for instance).  It was also the only app that we left on which was able to circumvent the auto-shutoff, helping to make it a permanent visible fixture on the coffee table.  The only negative comment was that during the blackout, I went ahead and loaded their Friday update, which re-arranged the UI, confusing those in the room that had already gotten used to the layout. 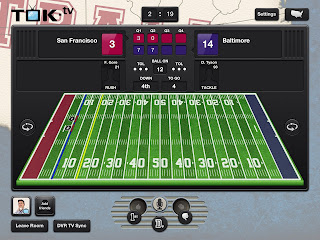 The other engaging experience we tried was TOK.tv's TOK Football. I was able to open up an audio session with Fabrizio Capo (the CEO of the start-up) in San Francisco, though admittedly it was hard to hear his comments over the rest of our room (he could hear our room quite easily...).  I thought the graphics we as well done as NFL '12 or ESPN ScoreCenter and they even launched a feature to sync the game with your DVR in case you were behind. 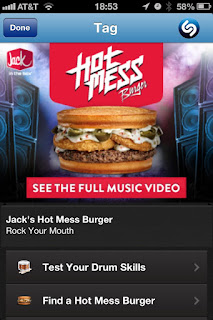 I tried Shazam and the audio sync worked.  I was impressed they had live stats, but the UI (from my phone) wasn't really designed to leave it "on" while watching.  Later, when I did see a Shazamable ad, I was able to successfully grab my phone from my pocket and "listen" fast enough to activate--first time ever.  The rest of the room, however, didn't see the point (esp. since it was for a commercial).

I never got Viggle to work during the game.  I thought at first it was ambient noise, by tried Shazam and Yahoo's IntoNow and both worked fine.  I tried "shhh-ing" the room, etc, but no joy.

I felt Yahoo's IntoNow experience was a bit like Shazam's.  It worked, but the UI wasn't conducive to leaving it open during the game--more like a use case of check the stats while in the kitchen grabbing a beer or something.

ConnecTV's new UI/UX is still perplexing.  I let the room play with it, but they thought it was just a Twitter feed (vs. the previous zeebox-like UI).  I will investigate further on my own this week.

We spent about 15 seconds on the Official Superbowl XLVIII Program and the online Guide.  As the room reminded me, that is stuff you read in you seat while you are bored--$9.99 down the drain.

We all really enjoyed the Coke commercial and the Doritos commercials, but no one felt the experience of trying to go online worked--should have been in an app or partnered with an existing app. 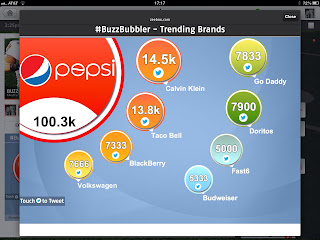 Everyone love the brand meter that zeebox had in their experience, surprising the room that the Calvin Klein ad hung onto the top spot for so long. 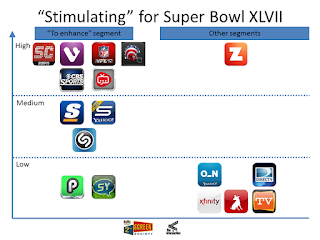 How did all of this stack up against our graphic from Thursday where we rated these apps against the "Stimulating" feature set for the game itself?  I would leave TOK Football, zeebox, NFL '12, and ESPN ScoreCenter in their "high" rating and move CBS Sports, ConnecTV and Viggle down.  I would probably bring Yahoo's IntoNow up to Medium.  Keep in mind that one game does not define an app, but there you have it.  You can see more about our methodology for app experience segmentation at www.2ndScreenSociety.com/research/.


Enjoy the week!  Grammy's coming up this weekend.