Masters 2012 App Reivew on the iPad 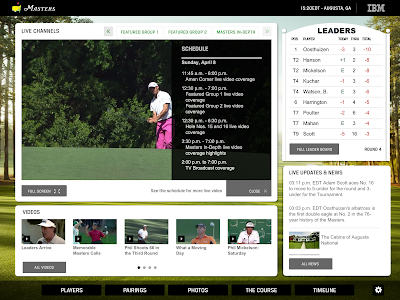 For anyone who saw the final round of the Masters last Sunday, you were treated to an exciting and incredibly stimulating entertainment experience filled with double eagles, come from behind efforts, and a sudden death play-off shoot out.  The Masters 2012 app for the iPad matches that excitement and stimulation on every level.  While this app doesn’t provide tons of social tools (perhaps the demographic is wrong) and doesn’t provide any control of your 1st screen, it more than makes up for those missing feature sets by providing a stimulating experience beyond what most consumers could have wished for.  The app was the perfect companion to one of golf’s most historical weekends, with the ability for the consumer to not just see the obvious additional information items like the leaderboard and bit of information about the players, but to see live video from the broadcast (delayed 30 seconds) or from one of 5 other camera locations on the course, to see the leaderboard with video highlights on the exciting holes (loaded nearly in real time), to see an in-depth view of the players weekend progress in addition to their professional backgrounds, and and incredibly rich and stimulating historical perspective on the course and the tournament in the form of a decade by decade multimedia timeline and video fly over course map. 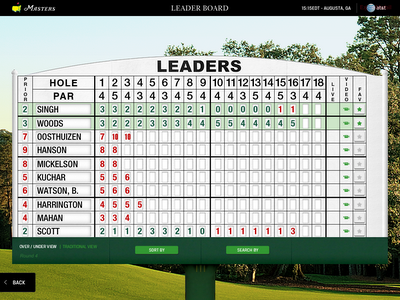 The user interface of the app is clean and simple, with the features centering the live video window (with 6 camera location options including the live broadcast) and highlight a mini-version of the leaderboard.  The video for the various camera feeds was delayed from live by 30 seconds, but started quickly and had no pixelation or frame issues, even when shown full screen on my iPad 3.  Drilling into the leaderboard revealed a rich and interactive view of the players’ progress, with video highlights available with a simple touch and an ability to select your favorite players so that they would always appear at the top of the board when you checked on their progress.  There was even an alert feature, letting you know when your favorite player was on a key hole or had moved up or down in the race to victory.  A live text update of significant events was provided just below the mini-leaderboard (presumably in case you missed something), and current video highlights were promoted just beneath the live video window, helping you quickly and easily find the most amazing shots of the day and the weekend. 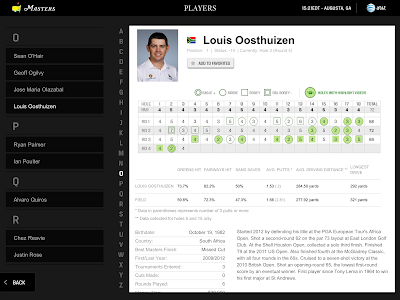 The lower nav bar on the app allowed for more detailed exploration on the course and the tournament, providing a rich media view decade by decade of both.  There was also a very well developed course map with the lore and legend of the course combined with the obvious video flyover of each hole.  Of course, there was a detailed photos section (both current and historical), and an ability to check the player pairings for each day (with tee times) so that you could more easily follow your favorite players around the course.

While watching the end of the tournament with a few friends on Sunday, we found ourselves constantly referring to the app to see recent hole highlights (the double eagle by Louis Oosthuizen) and to check on the leaderboard as a guide to switching camera angles while the broadcast was focusing on players we were less interested in.  When Bubba Watson started to come from behind, everyone wanted to know who he was and what tournaments he had won.  As the tournament headed to a sudden death play-off, the room immediately wanted to see the hole they had to play and how the 2 players had fared on that hole earlier in the day.  The only real missing feature set was the social arena.  While I don’t think most golf fans want live Twitter feeeds, something like the ability to share a link to those favorite video clips so that your friends who were not in the room could share the moment with you, even if not in real-time, would have been nice. 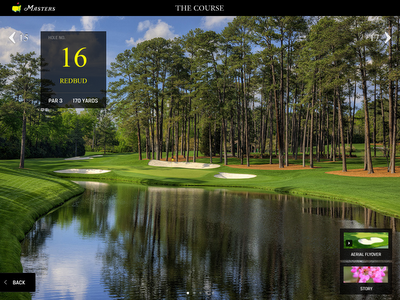 The Masters 2012 app has truly been world class delivery for a stimulating second screen experience.  I am hoping to see this level of effort for the other major tournaments (British Open, Ryder Cup, etc) in golf going forward.  At least for this consumer, it will certainly raise my interest and viewing time for all of those supported tournaments.