Watching The Golden Globes with Second Screen or The "multi-function" app vs. the "special purpose" app

We thought this would be the perfect opportunity to explore the "multi-function" vs. "special purpose" app debate that we (as an industry) debated last Monday during CES at the Second Screen Summit and that we explore in our recently published market report on second screen, "The 2nd Screen: Transforming Video Consumption".

Honestly, I thought I would be testing the afore mentioned E! Live from the Red Carpet (there was no special Golden Globes app) that I noticed has a new update earlier this week vs. zeebox, TVplus, Viggle, ConnecTV and Shazam as they are clearly leaders in the functional feature set of "Stimulating" and are either segment leaders in either "Multi-Function" or "To Enhance".  But, at least for the Red Carpet, I was mostly disappointed:


So the comparison came down to zeebox vs. the E! Live from the Red Carpet.

The special purpose app had some very interesting features: 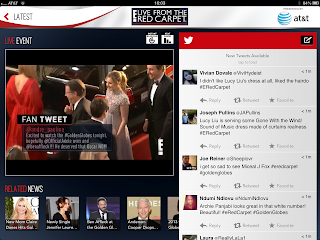 zeebox had its very busy but very functional UI showing: 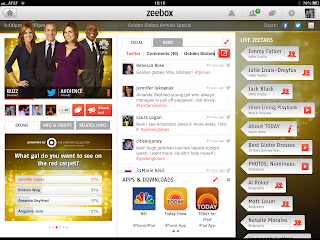 Perhaps more interesting was the you could use the same interface on zeebox for the E! Entertainment channel or NBC (both covering the Red Carpet)--my wife flipped back and forth depending on who was being interviewed. 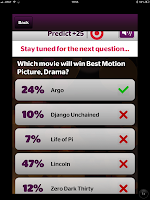 Once the Golden Globe Awards show started, Viggle had an experience (the quiz approach for gamification, sponsored by Target), but there was no other experience to try.  During the show, there were several ad spots for downloading the zeebox app.  I have to admit that I found myself using the app to check out the nominated actors quickly (reminding myself what they had been in) and watching some of the trailers of the films I had not seen.

The most revealing part of this experiment was that I knew my way around zeebox app and was gaining utility from it right away (and even swapped "channels" on the app to check out the score of the game quickly), while I had to spend the first 10 minutes exploring the E! Live from the Red Carpet app (though I am assuming it will be similar for the Oscars in a few weeks time).

So while I am sure the debate will continue to rage (and we will test this again during the Superbowl), at least for this program, the multi-function app seems to provide much more consumer value than the special purpose app.  Part of that could be down to the type of program (one that lended itself to the "who is that" nature of the awards show genre), but it is also clear that building a world class consumer user experience in terms of the app and the content for the app is getting more expensive and will need to be leveraged across more content to make financial sense.

So at least for tonight, +1 for the multi-function app and zeebox.