My Review of the Celebrity Apprentice Second Screen App by Activ8 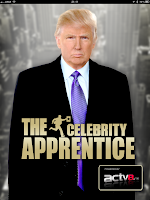 There has been a decent marketing effort for the dedicated app for the new seasons of Celebrity Apprentice (with Donald Trump).  The app released last week and I spent last night watching the show with it.  I was disappointed that it was an iPhone only app (meaning they did the whole 2x trick for the iPad).  I was surprised that I was forced to register before being able to do anything with the app, and disappointed that I couldn't register with my Facebook login. 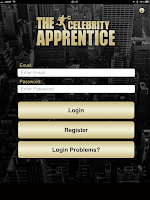 The audio sync actually worked really well.  While I am not a fan of the use of trivia or opinion polls being the use case for synchronized content experiences (so many better ways to engage the consumer), it worked with even relatively low volume levels. 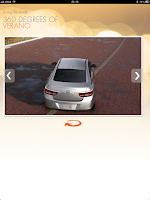 I loved the concept of an integrated commercial experience.  While watching a car commercial on the first screen, my iPad had a deep dive experience available which coincided with the 1st screen showing.  This is definitely the future of 2nd screen advertising. 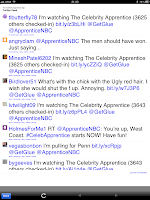 I wasn't that impressed with the social features.  The UI looked like a screen scrape of a Twitter screen (as did the Facebook feed).  The Social Buddy feature was a mystery, with a stranger UI (in Twitter). 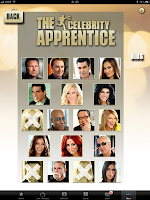 Of course, being a dedicated app gave it the best access to exclusive Stimulating content.  The features allowing you to see the cast (contestants) and their backgrounds was the highlight of the app (and if you are a Celebrity Apprentice fan, perhaps worth looking past its other feature faults).

- Simple.  No ability to control the first screen.

- Social.  Weak integration.  I would expect them to focus on this feature set as a priority next.

- Stimulating.  Good access to the deep dive information to support the show, including the ability to compete in trivia games, etc.  No synchronized experience outside the trivia game.  Medium.

- Seamless.  No provision of multiple sources to view the show.

- Discovery.  No features around discovering new content, not even other seasons of the show.