What happened to Second Screen this week?

What a crazy week.  As if it wasn't enough for NATPE to be taking place in Miami (with some great research and stats published about second screen), there was a ton of consolidation activity in our industry (Dijit/Viggle, IntoNow from Yahoo, Digitalsmiths/Tivo) and some rebranding by GetGlue.  At the same time the 2nd Screen Society (S3) published a teaser on its new research about monetizing the second screen, and then Gigaom and TechCrunch wrote some pretty disparaging views, with Gigaom reverting to the salacious headline of "Social TV is Dead".

It's no surprise that I received several requests from S3 members and from kindred spirits in the Twitter-sphere (thanks @Gip89) to attempt to help make some sense of all the news.  My head is spinning, too.

Let's try to pull apart this ball of string by looking back at the fundamentals of the space and what each of the news events might mean, keeping in mind that while this week might have seemed like a "revolution" in terms of the number of momentous events taking place, its been a relatively progressive "evolution", with each of these events building up over time in a manner similar to what we have been forecasting at conferences and in our research.  This is a bit like an eagle hatching from an egg--to those watching on the outside, it is a very momentous occasion, while for the bird itself, it is a milestone along his life journey that has been taking place inside the egg for sometime. 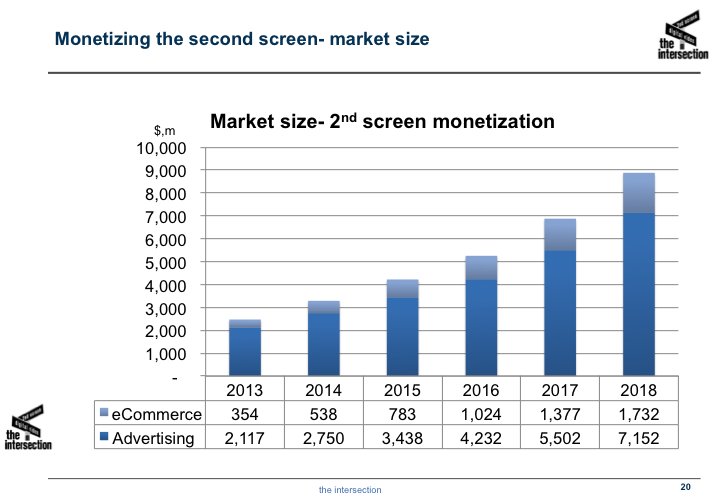 First, the fundamentals.  As we emphasized during our "2nd Screen by the Numbers" session at CES, this market place continues to grow at a rapid pace not because of the development of great user experiences on various apps of smartphones or tablets, but purely because of the massive proliferation of those smartphones and tablets and the ever present consumer behavior to turn to them in any lull of activity during entertainment (TV or otherwise).  The opportunity presented by the second screen phenomena is to capture this opportunity with an engaging consumer experience related to their video experience (companion or viewing) rather than letting email or Angry Birds seize it instead.  We spend a decent amount of energy across 30-pages of research on how successful business models are developing to monetize this change in consumer behavior, but regardless of our ability to capture the opportunity in terms of consumer engagement or monetization, that behavior will continue in larger and larger numbers.

Reviewing the facts with the lens of the industry fundamentals sheds a different light on each of these events, and in summary they all point one direction: It's ALL second screen!.  The proliferation of the devices, the changing millenial behaviors (preferring to view on their 2nd screen rather than the big screen), the early success in monetization of some companion and viewing business models, and the consolidation of the space which means more marketing and development weight behind the strategies to lead to successful consumer engagement (and monetization).