A couple of fun Second Screen games for the Superbowl

I found these apps preparing for tomorrow.  The first one you can start using tonight.  It's called "Stat Smack" and the idea is that you give the app the two teams who are playing and it gives you a whole series of stat-based facts to give you the ammunition to talk smack to fans of the opposite team.  As an example, I am rooting for the Patriots tomorrow and put them in as my first team, the Giants as the 2nd.  It then gave me facts that I could start posting on Facebook to drive my Giant-supporting friends crazy. 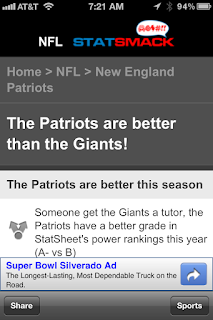 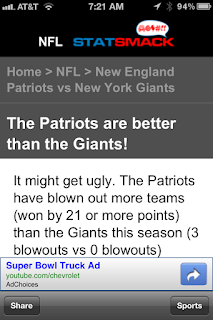 The 2nd app is more of a contest of skills.  The app is called "PrePlay" and it's designed for those people who sit in front of the TV and yell at the coach as if he could hear them (and gives a damn about what the advice would be if he could there them),  In this app, you and some friends try to predict what the next play will be (run, pass, etc).  You put your coaching prowess to work, and the app keeps track of who can predict the next plays.  Fun, if you think you are an expert, but even more fun if your friends think they are experts.

So, enjoy the Superbowl.  Enjoy a few SecondScreen apps.  Be part of the seismic change people will talk about years from now--2012, when the Superbowl was the milestone for success in Second Screen. 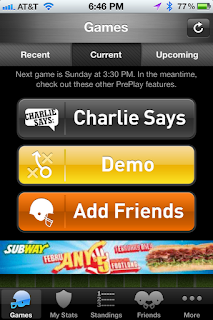 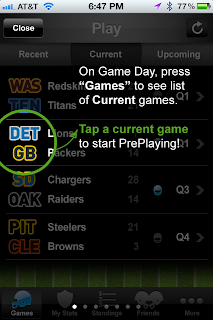